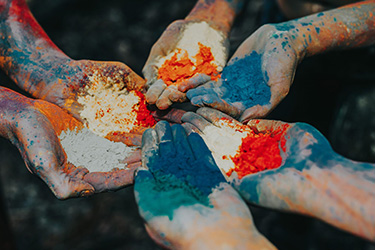 Having such a vast diversity of religions and cultures, Indians enjoy way too many festivals every month. Indians are very welcoming to foreign guests who want to discover Indian festivals.

Doesn’t matter when you come to India, during any month, you’ll see Indians celebrating their festivals. And in this blog, you’ll discover some of the Famous and Blissful Indian festivals which you can be a part of.

So, here’s the list of Indian Festivals that you enjoy:

Holi is a festival of colors that is celebrated by Indians around every state. Holi is celebrated in India in March and is followed by HolikaDhahan. Indian history behind Holi is worth reading, so I am bottom lining it for you in brief.

Holi in India is celebrated as the victory of the son of Hirankashyap, Prahlad over Holika.

Hirankashyap was a cruel king who wanted to rule and people to pray him. But his son was not afraid of him.

It is believed, that Holika was blessed with sitting in the fire without any harm. Hirankashyap, the king, wanted Holika to take Prahlad in her lap and sit on the fire.

The king wanted to hurt Prahlad. But the fire couldn’t hurt Prahlad, and instead, Holika disappeared. And from then onwards, the people of India started the bonfire a day before Holi, to show, Good always wins over evil.

After hearing this story, I bet this would enhance your Holi experience in India.

KumbhMela takes place either in Ujjain, or Haridwar, or Allahabad, or Nashik. Hindu devotees visit KumbhMela to take a bath in the Holy water of the river Ganges.

You can discover devotional singing, feeding millions of devotees, and a spiritual connection with yourself if you visit KumbhMela.

PushkarMela is one of the most colorful Mela after Makar Sankranti you can enjoy in India. PushkarMela is celebrated in north India in October (end) and November (beginning).

In Rajasthan, you can enjoy this festival of the desert. PushkarMela includes a mass gathering of pilgrims who came to worship Pushkarlake. Moreover, you can enjoy the cattle (camel) race, mustache challenge, Makeup competitions, stalls of jewelry, food, arts, and many more.

Rann Mahotsav is celebrated in Kutch of Gujarat during the winter season in India. RannMahotsav helps in the white salts of kutch in a Gujarati style.

You will discover another huge vibrant festival of RannMahotsav with luxury dinings and bonfires at night to prevent cold.

Makar Sankranti is a festival of Kites, celebrated in the whole of India in January (mid). You can take major enjoyment of the kite festival in Gujarat, India.

You’ll see many colorful and designer kites covering the sky which denotes the end of darkness and new beginnings. People gather on the terrace and playgrounds and enjoy flying and competition with kites.

Ganesh Utsav is a widely followed Hindu festival celebrated across India. One of the most important festivals for Indians and is made for 10 to 11 days on the occasion of Lord Ganesh’s (elephant-headed) birthday.

Ganesh Utsav is famous for its way of celebrating and worshiping Shri Ganesh by creating and decorating colorful tents, lightings, with Diya’s and Modak (Lord Ganesh’s favorite food).

Once, the Lords were in problems and they went to the Lord of Lords, Lord Shiv (Father of Lord Ganesh) to find the solution for their problems. Lord Ganesh and Lord Kartikey were there with Lord shiv asked them that who will solve the Lord’s problem.

Both Lored Ganesh and Kartikey agreed.

Lord Shiva asked both to compete against each other and the winner will solve the Lord’s problems. The competition was to revolve around the globe as soon as possible. Lord Kartikey left to examine the earth, but Lord Ganesha stood and kept thinking how he’ll examine the whole earth on his Mouse.

So, Lord Ganesh just started taking rounds across Lord Shiva and Parvati (Ganesh’s mother). After few minutes, Lord Kartikey returned and declared himself as a winner.

Lord Ganesh said, There is a whole universe is inside mom and dad, whether I examine earth or my mom and dad, it’s the same thing.

Hearing this, Lord Shiva was filled with Joy and Happiness and permitted Lord Ganesha to solve the problems of the Lords. And Indians pray to Lord Ganesh to solve all their problems.

Diwali which is also called Deepawali, is a festival of lights. Diwali is a Hindu festival, which is celebrated by mostly Sikhs and Jains in India. Diwali remarks as the starting of a New year of Hindu’s and lasts for 4 to 5 days.

Indians light up their homes with decorative lightings and Diya’s. Which is believed to guide Goddess of wealth, Goddess Lakshmi to find a way to our homes.

During the 5 days of diwali, Indians have a popular tradition of making Rangolioutside of the house. Rangoli is a beautiful design made out of colored powder, flowers and diyas.

At last, Indians burn firecrackers in the night and light up the sky. And celebrating Diwali is worthy in the month of october or november.

Pongal in India is celebrated as the mark of winter ends. Pongal remarks the day when the sun starts its northward journey, which is called uttarayan. You can enjoy pongal in India during mid of january (14th to 17th feb).

During Pongal, people visit their relatives and friends and share traditional gifts with each other. In some parts of India, Pongal is celebrated as Makar sankranti(Festival of kites).

After Ganesh Mahotsav, Navratri is the most celebrated festival across India. Navratri denotes nine nights of devotion to Goddess Durga who is known as the Goddess of power.

In some parts of North India, Navratri is celebrated as Durga puja. And the significance behind this is the Victory of Goddess Durga over Mahishasura. Which ends with the popular festival of Dussehra, which remarks the victory of Lord Rama over Ravana.

Inej Travel hopes this Blog on Indian festivals helped you discover Indian religion and festivals in depth. Now we’d like to have you on board to come and celebrate these beautiful festivals with us. Thank you.