We know many of the tourists plan to travel India and Nepal together so, by keeping their interest we have designed a combined tour package of both the neighboring countries. Honestly, speaking both the countries have a lot to explore which can’t be possible to explore in less than six to seven weeks. Although, our idea is to cover the maximum prominent tourist places wherein you have multiple travelling experiences for sure. The itinerary begins from India where you can explore the capital city of India, Pink city of Rajasthan, one of the seven wonders Taj Mahal and the oldest city of India “Varanasi”. Further you will fly to Nepal and explore the capital city along with Nagarkot which has ample natural beauty or mesmerizing views of Himalayas. You must have unmatched travelling experience from day one. Furthermore, you can also customize the itinerary according to your interest or number of days.

Arrival Delhi, meet and greet with Inej Travel representative and transfer to your hotel. Rest of the day the leisure. Overnight stay in Delhi.

Breakfast at the hotel and then proceed to visit Jama Masjid: one of the biggest mosques of India, located nearby Old Delhi’s busiest market. Further move ahead to Chandni Chowk market followed by Rickshaw ride. Chandni Chowk is Asia’s largest wholesale market of Indian spices and dry fruits. India Gate: a war memorial of 70000 Indian soldiers who died in the Ist world war. Drive pass to the iconic President House and Parliament House. Humayun Tomb: a tomb of Mughal emperor Humayun and listed in UNESCO World Heritage site. At last not least you will visit Qutab Minar: tallest brick minaret and listed as a UNESCO World Heritage site. Overnight stay in Delhi.

Breakfast at the hotel. Later check-out from the hotel and then drive to Jaipur. On arrival and transfer to the hotel. Evening proceed to visit Nahargarh Fort: a perfect place to enjoy the mesmerizing view of Sunset. Later you will enjoy the local dinner followed by Rajasthani dance show. Overnight stay in Jaipur.

Breakfast at hotel and then proceed to visit Amber Fort: one of the largest forts of Rajasthan and built at the top of Aravali hills. Entire fort was constructed with hard sandstone and marble which enhanced the Fort architecture. You will enjoy the short Elephant ride to ascend at Amer Fort. City Palace: built by Maharaja Sawai Jai Singh II and now also a residence of Jaipur royal family. Jantar Mantar: it is listed in UNESCO World Heritage site as a World largest working stone Sundial. Next you will visit Hawa Mahal: also known as Palace of Winds and built with Red and Pink sandstone of Rajasthan. Overnight stay in Jaipur.

Breakfast at the hotel. Later check-out from the hotel and then drive to Agra en-route you can visit Fatehpur Sikri – a popular tourist attraction on the way to Agra. Further continue your journey to the marble city of India. Arrival Agra and transfer to hotel. Overnight stay in Agra.

Sunrise visits the beautiful Taj Mahal: one of the Seven Wonders of the World. After visiting Taj Mahal you will go back to the hotel. Later in the morning you will check-out from the hotel and visit Agra Fort: the entire fort is built with Red stone and even offers you a glorified view of Taj Mahal from the Fort premises. Afternoon drive back to Delhi and transfer to a hotel. Overnight stay in Delhi.

Early morning transfer to railway station to board the train for Varanasi. Arriving at Varanasi station, meet with our representative at the platform and then transfer to the hotel. Evening witness the famous Ganges Aarti ceremony at Dasaswamedh ghat. Overnight stay in Varanasi.

Sunrise experiences the mesmerizing view of ancient Varanasi followed by boat ride. Return to your hotel for breakfast and freshen up. Later you will visit the ancient temples Kashi Vishwanath Temple: a popular Hindu temple dedicated to lord Shiva. Hanuman Temple: temple was built in 19 century and lies at the river corner. Tibetan Temple: a stunning example of Tibetan architecture. Banaras Hindu University: established in 1916 and spread over acres. More than 25000 students live in the campus as well as a few faculty members. Sarnath: prestigious and spiritual place of Buddhist religion. Afternoon enjoy some famous cuisine of Banaras. Evening witnessed the aarti ceremony again. Overnight stay in Varanasi.

Arrival Kathmandu airport, meet and greet with Inej Travel representative and transfer to your hotel. Relax at the hotel or you may explore the local markets. Overnight stay in Kathmandu.

Breakfast at the hotel and then proceeds for the sightseeing tour covering Pashupatinath Temple: an ancient Hindu temple dedicated to Lord Shiva. One of the twelve Jyotirlingas, which is located outside India. Boudhnath Stupa: a place is highly popular among the locals and for the tourists due to its religious facts. Kathamandu Durbar Square: one of the remarkable and historical identities of Nepal, the place showcases the traditional Kathmandu architecture. Jagannath Temple: one of the oldest shrines which was built in 16th century. Hanuman Dhoka: another popular place which was built in 16th century, holding an antique idol of Lord Hanuman. Evening you can visit the Swayambhunath Temple: an important shrine which is located at the top of the Semgu hill. Overnight stay in Kathmandu.

Breakfast at the hotel. Later check-out from the hotel and then drive to Nagarkot en-route visit Patan Durbar Square: Patan is now known as Lalitpur. The place has several statues, palaces and ancient temples. The one prime attraction for tourists is the Patan Museum. Further you will continue your drive and visit Bhaktapur Durbar Square: a well known place which has 12 significant temples as well famous for Nepali culture, exceptional wooden art and potteries. By evening you will reach Nagarkot. Overnight stay in Nagarkot.

Early morning enjoy the mesmerizing Sunrise view from your hotel. Later in the noon walk through a nearby village and to experience the local village culture. Late afternoon drive back to Kathmandu. On arrival and transfer to the Kathmandu airport to board flight for onward journey.

– Taj Mahal remains closed for visitors on every Friday.
– Jeep ride will be provided to Amber Fort if Elephant’s are fully occupied.
– Separate visa will be required to travel Nepal.
– Itinerary can be customized as per your travel needs. 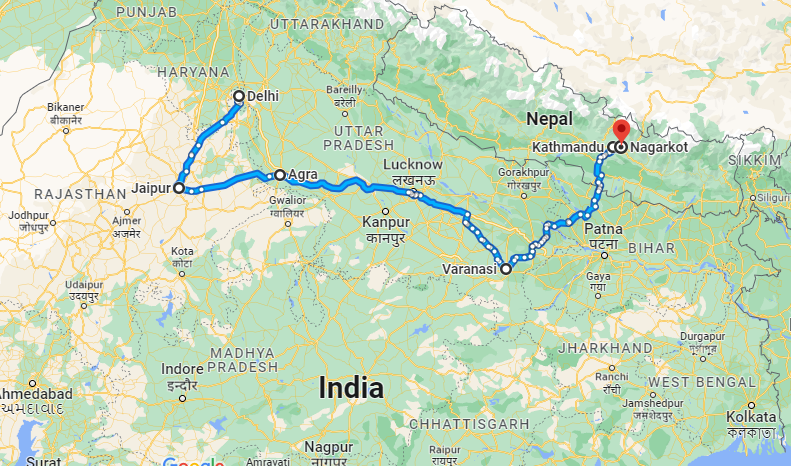 Journey to Kathmandu and Nagarkot